Finally got my hands on a new Max 360Ci.  I’m just getting started on the inspection process, but here is what we know already:

This unit so far appears to be nothing more than a clone of the AntiLaser Priority albeit without the performance.  It is not much better than the K40 Optic Defuser which we reviewed last year. Oh and by the way we have still not seen an update from K40 to address any of their shortcomings.  Clearly AntiLaser still leads the industry as the top performer.  While we have not tested the MaxCi on a vehicle yet, we can tell you if it is not seeing the current DragonEye guns they certainly can’t jam them.   On older DragonEye firmware, the Max CI does attempt to jam it, but we can’t test this on a bench. We can tell you that under IR the MAX system switches to single transmit mode when the older DragonEye gun is used.  In this mode, one head transmits while the other monitors for the next pulse.  This is a technique patented by ALP so it will be interesting to see how this plays out.

The MaxCi uses GPS to determine if the vehicle is moving and will not use the transmitters if the vehicle is not in motion. This appears to be a page taken from the Stinger VIP.  The Stinger VIP also does not transmit if it doesn’t have a GPS speed greater than a threshold.  The Stinger VIP implemented this “feature” to ensure they protect their intellectual property and keep their algos from prying eyes.  Escort does not appear to have implemented this and are firing even if the GPS signal is lost.

Another interesting thing to note is there is no silicone epoxy on the board or on any of the internal components. This is troubling because other manufacturers have had issues with water in the past. Most manufacturers today use a black silicone epoxy to protect the internal components from water/condensation. You can see from the images below there is no such silicone on the Escort device.

It will be interesting to watch what happens with these systems and RALETC will continue to monitor the progress of the Escort Max Ci and test other aspects of the system, but at this point in time, in our opinion, it has not lived up to the hype.

Here are some head disassembly pictures for your enjoyment: 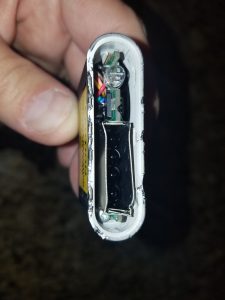 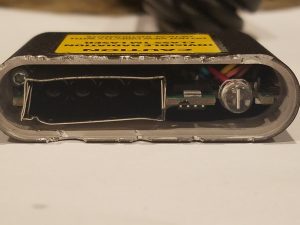 What is the best laser Jammer? Escort Max Ci vs DragonEye Compact

What is the best laser Jammer?